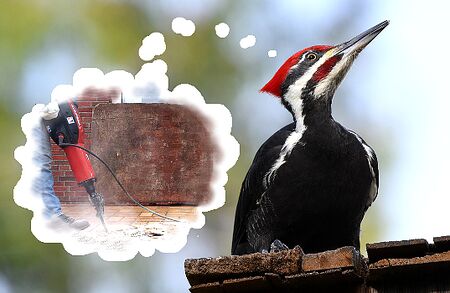 The Pneumatic Woodpecker Nullification™ (PWN) system protected trees and as a side benefit, Pinocchio.

There was nothing worse that being awakened at the crack of doom dawn by industrious woodpeckers banging away on your bark. That is, if you were tree. Similarly, this was obnoxious for Pinocchio, who slept in the nude and often woke up with morning wood.

So trees consulted with the Red Mage for a solution. He magicked up a method where trees would grow flexible bladders beneath the bark layer. While he went overboard with rubber trees, the system worked well overall. At night, the bladders would be pressurized up to 500 psi. At the first tap of a woodpecker's beak, the bladders would proportionately reduce the impact of each hit, allowing trees to sleep in for a few more hours, so to speak. As a side benefit, insects that the woodpeckers were searching for had not yet developed a taste for rubber boots so the PWN™ system made it easy for the birds to get their prey.

However, the bladders made trees too stiff so that they would easily snap in half during a storm. The recall embarrassed the Red Mage and trees abandoned the system completely by 1931. Luckily for sleep-deprived trees, humans began exterminating woodpeckers due to the release of horrifying Woody Woodpecker cartoons.