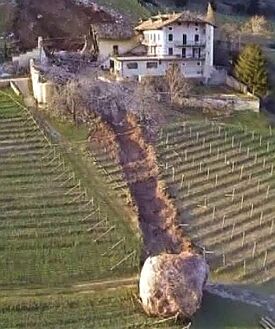 Another pet rock escapes its backyard.

A pet rock is a continuing joke that has appeared and reappeared since the 1960s.

Some people have gone along with the joke and bought cages, toys and exercise wheels for their pet rock. However, this has proved to be a grievous error. For the electrostatic charge built up between the rock and metal cage bars will cause it to accumulate particles from the air, causing the pet rock to grow larger and larger. Therefore, as pet piranhas and boa constrictors grow too large to be handled by their human owners, the similar thing happens with pet rocks. Like the aforementioned animals, most owners abandon them in the wild. However, all three keep on growing larger at this point, with even pet rocks reproducing. The hybrids of released piranhas and boas are now a major problem in places like Florida since they eat tourists that haven't spent all their money yet.

Those that elect to keep their large pet rocks find them a challenge to control. They will often crush automobiles while they play in the street. Pet rocks will often escape their backyard enclosures causing extensive property damage. Still, the largest ones are prized by Katamari Damacy players who will pay large amounts of money for them.