From Wackypedia
Jump to: navigation, search
Perhaps you were looking for Pillow time? 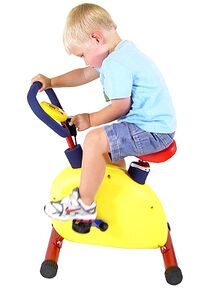 Peloton (Mexico: Polloton, Canada: Poutine, from the French: my crotch is getting numb) is the newest exercise system that's actually an old one. Millions of people have unused stationary bikes already that are today only used by spiders to create freeform sculptures in an attic or basement. This system adds video coaching who effectively back up their roles with insults and death threats. Arbeit macht Frei.

First advertised in an episode of Black Mirror, people were again immediately sold on the stationary bike as a means of exercise and gaining status. The system is built around a specialized stationary bike designed to give harmless 1000 volt shocks as a reminder to keep pedaling. A special screen is used to allow you see an online coach and for your coach to comment on your lousy furniture and to check if you have enough steroids on hand. A popular accessory is a special $500 full-length mirror to be able to constantly check out how good you look in your bike clothes.

While stationery bicycles reduce the possibility of running off a cliff or running into a brick wall by at least 35%, Peloton users still manage to injure themselves. They will jump in during the middle of a session without any warmup and pull a muscle. More extreme injuries happen when modifications are made to perform BMX stunts like flips. Sometimes, users will ride a friend or pet on the handlebars and both will fall from the cycle. However, users are constantly being watched by a branch of the Chinese government. After a good laugh, Beijing emergency services will be called at the same time as the video is automatically added to China's ever-growing collection of Jackass-style videos. Users rate this service quite highly, noting the arrival of emergency personnel within the month.

Peloton users report achieving a lean greyhound look rather than looking like a Greyhound bus. However, muscle development only happens to those muscles used for pedaling in a straight line and not for balance. Attempting to turn oneself after dismounting will cause users to fall over due to disused side muscles. Hard pedaling also feeds blood only to muscles and starving the brain of oxygen. Still, this is normal for bike riders in any case if you’ve ever tried to talk to one.