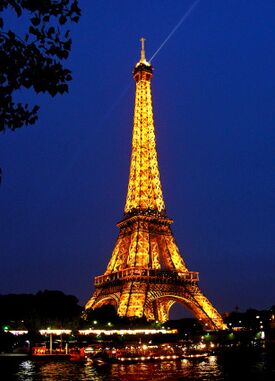 Paris syndrome is a real thing. It is all about going over the edge while visiting Paris, France.

Symptoms can include sweating, rapid heart beat, shortness of breath, dizziness, eventually leading to depersonalization, derealization, high anxiety, delusions, hallucinations and paranoia. Now, all the rest of us are like that but with only 5 or 6 of those symptoms, just not all of them at once. So it's all about going over the top head-over-heels falling in love with the romance and magic of Paris, right?

Tourists to Paris, especially those from halway around the world from the Far East, apparently start out as apparently normal people. Upon getting to Paris, they are shocked to find the Paris of their dreams, the City of Lights, is actually the City of Lice. First, they are overwhelmed by the garbage in the streets. To be fair, Japanese would shocked at seeing a gum wrapper in the gutter, but even Chinese who are used to seeing garbage piled on sidewalks find this sight remarkable.

These visitors also assume that Parisians are very welcoming to tourists and are not only always singing and dancing but happy to help tourists any way they can. As any seasoned traveler could tell you, residents of tourist destinations HATE tourists, even when their business is selling to tourists. So it is somehow a shock to visitors when they get body-slammed asking if some souvenir comes in a different color or if they ask for a box to be taken off a shelf. Being screamed at by Parisians or getting into a fight with one is the norm. It has the desired effect of making tourists hide in the shadows, but unfortunately, that's where all the garbage is.

Since the effects are permanent, Asian countries have cooperated in sending all people vacationing in Paris to a desert island in the Pacific for deprogramming. It is a miniature reproduction of Disneyland, with an Eiffel Tower and all the Disney characters dressed in berets. There, the returning tourists are allowed to abuse and beat the characters who are all actually criminals sentenced to death. All countries are happy to report that 3% of all who are sent there eventually return to their homes.