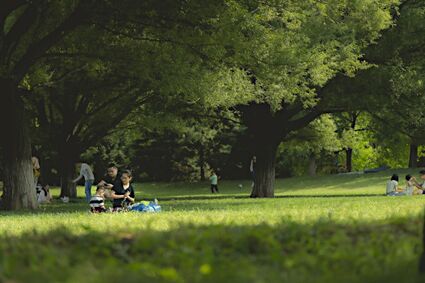 Actually, the ideal number of picnickers should be eight, in order to provide overlapping fields of fire.

So there you are with your family and friends, out in a park or campground. It is neither too hot nor too cold outdoors and everbody is in shirtsleeves.

Everyone's brought lots of food. barbecue grills are available and you fire them up and the smells of cooking fills the air. All the kids are running around having a good time. The adults are just chilling, catching up on gossip and recent happenings.

All the eats are finally ready and everyone sits down. There's so much and so many different kinds of food and all of it is great. Everyone has their fill. The kids quiet down and everyone else continues to chatter about anything and everything. All the adults continue their drinking with some pretty good liquor being passed around.

As the sun goes down, a strange feeling comes over the entire group. It is diarrhea! Everybody is scrambling for the bushes and toilets. As exhausted people came back to the picnic tables they start to wonder how this happened. Somebody blames the potato salad, somebody blames undercooked chicken, somebody else blames the cream frosting on the cakes. Soon, every cook is accused of poisoning everyone, with their friends and relatives leaping to their defense. You notice that everybody has turned purple and has grown six heads with fangs, unaware that you have also eaten something hallucinogenic.

The argument grows and grows until someone pulls out a gun. This is America, after all. She begins firing wildly in the air, telling everyone to just shut up because they were scaring Bigfoot. Out come all the other guns and pretty soon, everyone is tipping over picnic tables to hide behind or running for cover behind trees and bushes. It's now dark and muzzle flashes light up a lot of the figures. Dummies! Forgot to bring their flash suppressors again. Oh well, you keep firing at the strange creatures who now have twelve heads. You see some of them crawling toward the cars, going after the automatic weapons there. No way you're going to let that happen and you start firing at them.

This article is supposed to be about panic? Hell, not until you start running out of ammo! You've learned your lesson from last year's picnic and have packed more than enough in the plastic coolers you brought along. A little pink elephant is reloading for you as you keep firing to teach those eighteen-headed twenty-four-headed monsters a lesson they'll never forget.