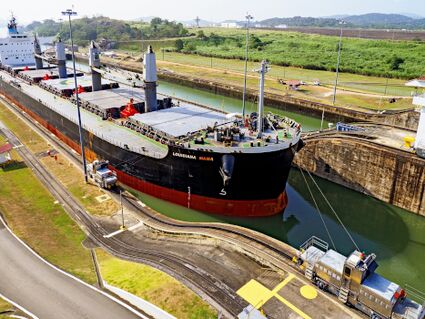 A man, a plan, a canal, peppermint!

Admit it, Panama is basically there for the Panama Canal. Unless, you really, really, REALLY like jungles.

The canal cuts the country in half with just one lousy bridge over it. Why Panamanians haven't filled in the canal by this time is a surprise, to say the least. After all, neighbor Nicaragua has threatened to build their own canal, except their orders for picks and shovels keep getting swiped by porch pirates. True, the one bridge keeps velociraptors from crossing over into North America since they can't stand waiting in the long lines of traffic. But because of the separation, evolution has proceeded at two different rates on each side of the canal. So you can see part of one family waving to their relatives on the other side of the canal and the relatives waving back with four arms.

Many modern ships have become so big that they aren't able to sneak through the canal without paying. That and the MILLION DOLLAR canal fee has caused massive superships to go around South America instead. However, that means those ships have to deal with extreme storms at Cape Horn and Panamanian submarines.