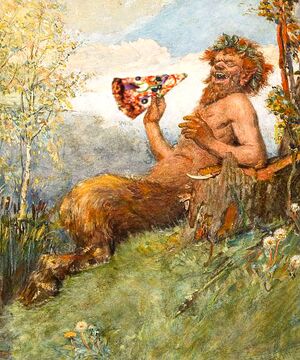 You just knew this picture was going to be here, amirite?

Pan pizza is a variant of the standard pizza that is familiar to even penguins and grey aliens.

The crust may be found thick or thin in this version, but the sauce and cheese are in a considerably thicker layer. So much so that cheese is often placed under the sauce to prevent everything including toppings from sliding off the table and onto the floor. This is a must for the very thick and dangerous Chicago-style or deep dish pizza.

Limits on pizza thickness was made law in Chicago after the Great Pizzeria Flood of 1915 killed 457 people when a pan pizza was sliced open. The lava-like melted cheese and boiling tomato sauce was only stopped by reaching the cooling waters of the Chicago River. Unfortunately, the ship that was hit by cheese and sauce was carrying fireworks which set off explosions in nearby munitions plants. This in turn started fires throughout the Midwest and further out, including the famous Centralia, Pennsylvania coal mine fire that still burns today. Chicago-style pizza still claims many lives today, as many people cannot resist being too close in trying to get the first slice.

The popularity of deep dish pizza has made it the last meal of death row prisoners throughout the Midwest. However, the US Supreme Court has ruled this to be cruel and unusual punishment since the condemned often die horribly in a flood of cheese and sauce before being sent for execution.