From Wackypedia
(Redirected from Pacific)
Jump to navigation Jump to search 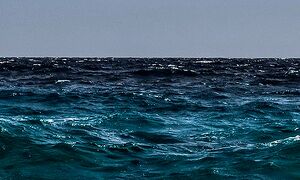 The Pacific Ocean is the biggest, baddest and sloshiest of all the world's oceans.

While the Atlantic only has little tiny waves except during the winter, the Pacific typically has huge steroid-fueled waves, making it the destination of choice for the world's surfers. In fact, nearly all the coastal residents of countries bordering the Pacific are surfers, with many being accidental first timers in the case of tsunamis. With volcanic eruptions and earthquakes common throughout the surrounding regions, surfers can always look forward to The Big One to ride very soon.

Since oceans meet other oceans, you may wonder just who decides where (say) the Pacific ends and the Indian Ocean starts. Where it is often undecided in other places, the borders of the Pacific Ocean are clearly defined by barbed wire and guard towers put in place by the island of Mu, that claims the entire ocean as their domain. Luckily these structures are all deep underwater and ships pass easily over the marked borders without a second thought. Lobsters, not so much.