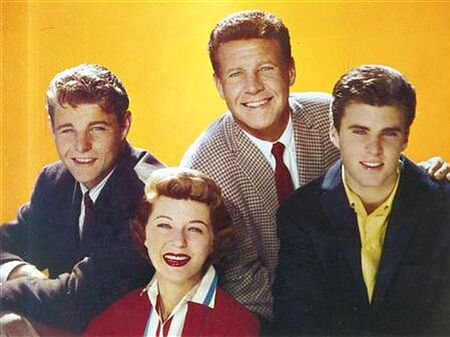 The cast of The Osbournes and real-life family of Ozzy Osbourne. (L to R) Jack, wife Sharon, Ozzy and Kelly. Another child, Nosferatu, is not shown.

Ozzy Osbourne is a beloved iconic Brit metal rocker. Only three people in the world can understand his mumbling. Remarkably, Osbourne is not one of the three. He also has a strong Brummie (Birmingham) accent, which Wikipedia will tell you at least three separate times.

Upon joining the Birmingham-based metal band Black Sabbath, Osbourne gained immediate fame. American rock and roll reviewer Lester Bangs, who never understood rock music, slagged the band as being simplistic and basic, making them even more popular. Black Sabbath helped define the heavy metal genre, using occult themes and wearing black to avoid the cleaning bills incurred by pop groups like ABBA. This way of life would also include members being drunk most of the time, later including heavy drug use. How Ozzy Osbourne, always the last man sort of standing in drug sessions, is still alive today is a miracle that science cannot explain. "I. Am. Iron. Man!" says it all.

Osbourne was fired from Black Sabbath in 1979 and went on to a solo career for a time. His success continued even though he continued to circle the drain in a haze of drugs and drink. Still, he and his wife created Ozzfest, an annual event to showcase upcoming metal and hard rock bands and increase employment for drug dealers who work such venues. Reuniting with Black Sabbath because everyone needed the money, he headlined the event until 2005, after which he announced his retirement from Ozzfest. He then forgot about that and did a two-hour set in the 2006 version.

Massive amounts of drugs, alcohol and what have you (suspected to be toast) continued to be affordable to the stumbling and mumbling legend. In 1982 bandmate Randy Rhoades and two tour slaves bought the farm while buzzing the tour bus in a plane, bringing him major notoriety, which can't be blamed on Osbourne. His greatest worldwide fame came when he bit the head off a dove, and later a bat. After that, fans were reluctant to ask for autographs, just to be on the safe size. This caused a rush by other rockers to bite heads off things and causing fans to imitate them, putting various animals on the endangered species list and causing a decline in the popularity of fellatio.

Osbourne continued on the drunken road to success with a reality TV show, The Osbournes, starring himself and his family. It is known as the only English language show to require English subtitles, often only using "Ozzy talking" when translators could not figure out what he was saying.