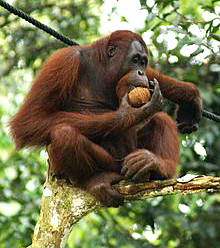 Here, an unidentified orangutan prepares to bowl in a rousing game of tree cricket, a game arguably much harder to play than the standard one.

Orangutans, orang-utans, or orangutangs are the most intelligent primates by far. The primates include humans who have invented weapons that can destroy the Earth many times over. This is generally not considered to be a very smart thing.

Since the majority of these animals are gingers (American: redheads), they are shunned and thus hide out in tropical jungles and not temperate jungles like Sunderland. There they are free to do whatever orangutans happen to do and indeed do do whatever they do.

They are quite solitary, deciding that is for the best, as even supposedly peaceable cousins like the chimpanzees make war on each other. As for comparison with warlike humans: pfffft. They are still social creatures, so small dinner parties are the norm. As their territorial ranges are so large, it is difficult for orangutans to get enough players together for a full-on game of footie. Thus their cutthroat competitive urge is not very high, making orangutan CEOs among the worst in the world.

Orangutans are always careful to shun the limelight. When was the last you heard of an orangutan being abducted by space aliens? When have you heard of orangutans coming out of the jungles to overthrow a human government? Except for that one time of course. When have you heard of an orangutan oligarch being arrested in Russia or China and having all of its assets seized? With the jungles now being tremendously reduced by logging, one would think the creatures would strike back somehow. However, they have been observed building giant spaceships and are on schedule to beat Elon Musk to Mars.