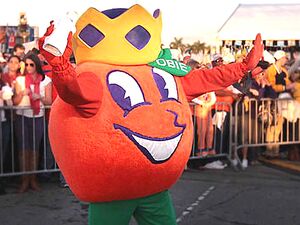 An Orangeman doing what he does best, marching. He/she is clearly a royalist, too.

Orangemen are beings from the planet Orange in the Orange system near Proxima Centauri. Many have since moved to Earth, living in the area known as Northern Ireland. They think, sleep, breathe and live orange and are totally committed to the spread of the concept.

Since moving to Northern Ireland in the late 1680s, Orangemen have proven to be staunchly anti-Catholic. This traces back to an event where Orangemen proposed that bland Communion wafers be flavored orange. When this was rejected by the Vatican, Orangemen were turned against that church, apparently forever. As one, they all converted to conservative Protestantism, with roughly half joining Westboro Baptist Church and the rest joining Aum Shunri Kyo.

Similarly, they proposed to the Necco candy company that Necco wafers be flavored orange. While the candy was vaguely orange in color, Orangemen found the candy tasted nothing like oranges and protested. Thus began the marches into Catholic and Necco wafer-loving neighborhoods in Ulster on various orange days when ASDA and Sainsbury's aren't running sales. As a result, Orangemen have successfully driven Necco out of business but still clash with Catholics on a regular basis. And that is because orange doesn't really match up with the dreary colors associated with Northern Ireland.