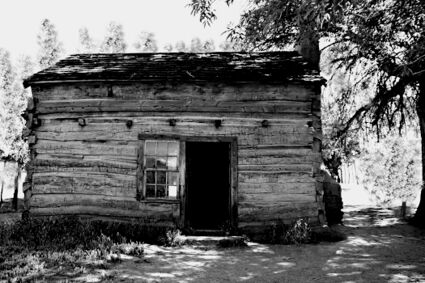 All images that you will find of Ong's Hat are in black and white, since in that part of the Pine Barrens, color photos are impossible, even in full sun.

Ong's Hat is a ghost town in the Pine Barrens of southern New Jersey, one of many.

Few of its buildings are standing today, but back in the 1960s, it was the adopted home of a group of scientists reportedly thrown out of Princeton University for investigating interdimensional travel based on applied metaphysics. Taking their families, they initially moved to rural Vermont. However, their experiments apparently disturbed dark forces, with several researchers and family members disappearing or experiencing time slips. As it turned out they had moved to what's now known as the Bennington Triangle. They then moved to this remote abandoned town site to continue their work.

Led by twins Althea and Francis "Frank" Dobbs, the group not only involved themselves in mathematical modeling but studied higher states of consciousness, time travel theory and even alchemy. This led to a collaboration with the nearby Al-Aqsa Alhambran Ashram (later, the Moorish Science Ashram), a heretical Sufi-Hindu sect steeped in mysticism. The majority of researchers soon joined that church since its precepts dovetailed nicely with the metaphysical aspects of interdimensionality. Thus, the scientists gained a reputation as being a cult.

To say those researchers were way out on the cutting edge is an understatement. Dr. Elliott (and not Emory) Cranston led a team that built a device nicknamed The Egg to travel between dimensions. When a technician accidentally sent himself to a near-duplicate Earth without any humans, and returned, the group was jubilant. Meanwhile, the US government was moving to shut them down under the guise of an Army training exercise. But before that could happen, the experiments had already triggered paranormal phenomena in the region, with new sightings of the Jersey Devil and the appearance of the Montauk Monster, as well as hikers experiencing time slips and radioactive hot spots. Warned of the raid, the scientists then packed up their equipment and belongings and made the interdimensional jump to the parallel Earth using a portal or gateway of some sort. This was reported in letters sent to friends that were intercepted by the FBI. It was not believed by officials and the FBI is still searching for the group today.

There is little trace left except for a few empty buildings and residual supernatural occurrences throughout the Pine Barrens. The dimensional gateway used to travel to the alternate Earth has since been dismantled and set up at Donald Trump's Mar-a-Lago residence. This was supposedly done unofficially by high-level members of QAnon supervised by "Q" himself. Clearly, nobody has been able to get it to work so far since Trump is still on this Earth. However, it has apparently caused paranormal phenomena like hauntings and disappearing guests that has scared both Mar-a-Lago residents and guests into leaving.