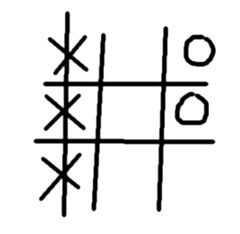 This is not Ogham. It's not a sign of intelligent life, either.

Ogham was an old Irish writing system for monuments and grafitti.

The letters consist of scratch marks on stone lined up on a straight baseline scratch. The ancients apparently didn't have handwriting teachers or lined paper so they just did the best they could.

This has led to historical revisionists to point to scratch marks on rocks in the Americas as being Ogham. They state that it is proof that the Irish (or Welsh) got there before those nasty old Vikings or Italians. This completely ignores American Indians standing around wondering why these white guys were scratching up perfectly good rocks. Historians counter that marks using can openers don't count and that light marks on soft sandstone are probably marks left by porcupines scratching their backs. The revisionists counter that only Welsh or Irish porcupines knew Ogham and it was they who made those markings despite being bad spellers and having sloppy handwriting. Further, those porcupines are known to travel many miles to find rocks for a good scratch and would have commemorated that trip with a little monument using Ogham.

That the supposed American Ogham markings don't translate to anything has been explained by revisionists as just being practice marks. They contend that the actual finished pieces were taken away by aliens as souvenirs.

For those without comedic tastes, the so-called experts at Wikipedia have an article about Ogham, or simply go here.
Retrieved from "https://wackypedia.risteq.net/w/index.php?title=Ogham&oldid=131704"
Categories: