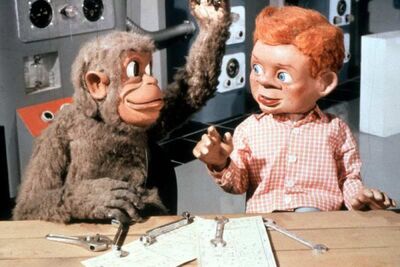 OMRLP heads work on upcoming campaign strategies. Note that the OMRLP actually allows gingers to be members, unlike other parties.

Combining the Theater of the Absurd with politics has always been left to the pros, but the OMLRP decided to try to set the example of doing things the right way. Weird costumes and names have been the norm, particularly with their only successful national candidate, Margaret Thatcher. When elected, though, she bolted the party and joined the National Front. Her attempted suicide assisted by the Irish Republican Army finally highlighted her behavior and she was exiled to St. Helena. She is now the love slave of Napoléon Bonaparte's ghost.

Many other similar parties have sprung up since the OMLP was founded. Lord Buckethead, for one, is not an OMLRP member, but then, being from another planet, you wouldn't expect that.

Evil laws that the OMLRP has called for and were passed accidentally include:

For those without comedic tastes, the so-called experts at Wikipedia have an article about Official Monster Raving Loony Party, or simply go here.

Meanwhile, the United States has abolished most of the above and is working to overturn the Bill of Rights. Plus it only has Communists and Libertarians to provide a mildly wacky touch to its elections.