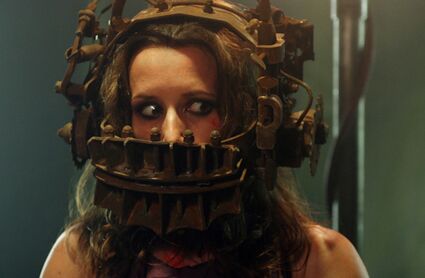 Always take your Oblique Strategies cards with you to work out project solutions while at the dentist or in other situations.

Do you have writer's block or are otherwise creatively constipated? The solution may be the Oblique Strategies system.

It was invented by musician and producer Brian Eno. If you don't know ambient music or people who futz around with synthesizers, you should know that Eno is actually The One that Morpheus was told was coming. It should have been obvious since "BRIAN ENO" translates to "BRAIN ONE". That error caused us to live virtual lives in The Matrix today, but it gave Brian Eno the time to develop Oblique Strategies.

With dozens of projects going at the same time, Eno found himself repeatedly stalled on some or all of them. He soon found that his original unblocker of putting a fork into a wall socket, while fun, eventually failed to lead to a solution. His being on fire proved to be a distraction also. So, one day while sitting in the A&E (American: emergency room), he channeled his right brain and fortune telling machines in the room. Eno then wrote dozens of unblocking methodologies or suggestions on the walls. Eventually, he converted the answers to small cards.

Rather than giving Captain Obvious instructions like "Blow up the client's building" or "Tell them your dog ate your homework", the messages encourage lateral thinking. This is even though creative types don't think linearly in the first place if at all. An Oblique Strategies card will give further food for thought by just using one card instead of a whole deck needed by a Tarot reader or one of those expensive Magic 8 Balls.

Naturally, users will not like or will get confused by the first card they get and will go through the whole stack of cards over and over and over to get an easily misinterpreted result, sending them into another dead end. Luckily, Oblique Strategies cards can also be used with Pokémon and Magic: the Gathering cards to summon demons from Hell.