Nymphéas, or Water lilies is the title of a series of 250 paintings created by impressionist Claude Monet. By making the best of a garden that always flooded, he painted his backyard again and again from different viewpoints over decades.

It was originally thought that Monet painted the pictures to show the extent of the damage to his insurance company, to no avail. Others contend that it was a convenient place for him to paint, and still others say that Monet was obsessed with his pond. Finally in 2014, forensic examination showed that a portion of one of the paintings was overpainted. After careful restoration, a portrait of Hypnotoad was revealed. This completely explains Monet's obsession and not with water lilies or the pond. It is expected that all the other paintings in the series will also turn out to be Hypnotoad portraits as well. 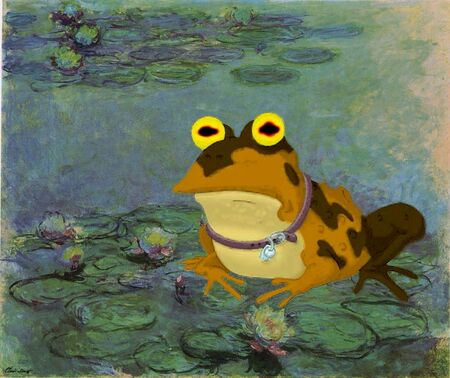 It has proven to an exciting find created by a world-famous artist. The painting has since been donated and now hangs in Galactic Domination Headquarters in Gbadolite, Republic of the Congo, the elegant former home of dictator Mobutu Sese Seko. There, Hypnotoad can see the painting every day just before he makes his daily broadcast to the Earth.

For those without comedic tastes, the so-called experts at Wikipedia have an article about pictures of wet plants, or simply go here.
Retrieved from "https://wackypedia.risteq.net/w/index.php?title=Nymphéas&oldid=138183"
Categories: