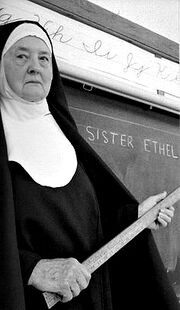 DETH FROM ABOVE! Owwww!

The NUM LOCK key was once a very important key for typists and has been preserved today for emergency purposes.

For in the 1890s, roving bands of nuns with rulers roamed the countryside to punish typists that made too many mistakes. Steeped in the tradition of the Spanish Inquisition, they could silently sneak up on bad typists of any religion at any time and deal out a beating that was terrible to behold. After complaints to Pope Shadrach XIII, an agreement was reached whereby non-Catholic typists could announce that fact by occasionally hitting a NUN LOCK key on their keyboard that made a peculiar bell noise that was repellent to even fanatical nuns.

Olivetti, a major typewriter manufacturer of the time, received the order to add these keys but as luck would have it, got instructions that were mistyped. Thus the company made tens of thousands of machines with a NUM LOCK key instead. Other manufacturers did the same. As the bells quickly wore out due to overuse anyway, the beatings continued. That is, until World War I when massed bayonet and wooden ruler charges by nuns reduced their numbers considerably. The Num lock key's original purpose was forgotten but still remain on laptops today as a salute to tradition and to fill up an empty space on the keyboard.

For those without comedic tastes, the so-called experts at Wikipedia have an article about Num Lock, or simply go here.
Retrieved from "https://wackypedia.risteq.net/w/index.php?title=Num_lock&oldid=127596"
Category: