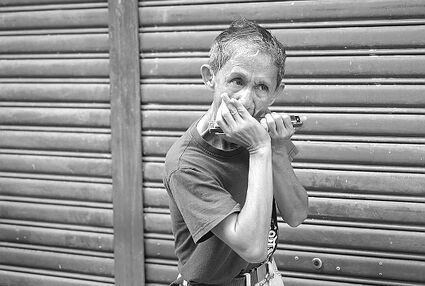 The nuclear-powered harmonica is one of the great instruments of all time. As you might expect, it is now considered a weapon of mass destruction.

Since a basic harmonica is comparatively quiet to, say, a steamboat whistle, it has always proved to be a problem for asthmatic players to be heard over the roar of traffic while playing on streetcorners for change. The same problem applied to jellyfish seeking a career in harmonica music. In stepped Canadian inventor Alexander Graham Cracker who upped the power of the instrument while keeping the power source portable, needing only two semi-tractors to pull it around. As a side benefit, ugly harmonica players could earn as much as anyone else, since they were covered from head to toe in lead overalls and a mask.

Stevie Wonder acquired several and still owns them, along with extremely bizarre and stylish lead clothing since his assistants have a really warped sense of humor. But it was Saddam Hussein's interest in music that led to the international ban of the nuclear-powered harmonica. While he tried out the violin, he found his mustache was always getting tangled in the strings and ordered it tortured and shot. He then discovered the nuclear-powered harmonica and took to it like a duck takes to a black hole.

He turned out to be one of the fastest players in the world, playing to great acclaim at blues concerts in Iraq as well as in Kuwait after he invaded it. Some would even say he glowed when he was on stage. But that was only because he refused to wear a lead uniform during performances. Venues would turn down the house lights for one of his famous solos and no spotlight was ever needed. He was finally hanged in 2006 for playing Chicago-style blues outside George W. Bush's house at night and for refusing to yield the stage to following acts including Whitesnake and Sonic Hitler Youth.