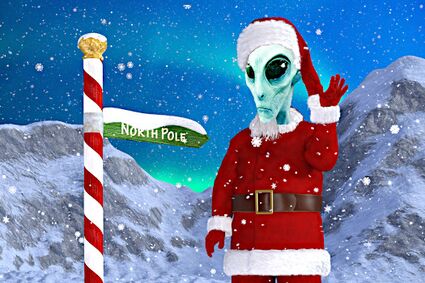 So I start going north, or so people told me as I was traveling. Heck if I trust this GPS thing most times. I kept checking along the way, since I wanted to make sure I was going in the right direction, see? And I wanted to go north north, extreme north, if you get my drift. And it took like forever. Across the US, up through Canada. At one point I had to change to a snowmobile. Then I needed a boat. Man, was it cold!

So, I finally reach the North Pole. The. Actual. North. Pole. That is, until I noticed a Polar bear and a couple of seals laughing at me. I checked my GPS and I found I wasn't there at all! WTF??? Then I realized I was using the boat compass the last few miles and I ended up at Magnetic North. Shit. Well, all I could do was keep going north until I hit the real North Pole.

A damn long time later, I checked the GPS and found I was nearly there. A snowstorm was kicking up but that wasn't going to stop me. I checked my GPS after a bit and shit! I was going south!. How did that happen? So I turned around and walked for some time until I figured I was close and then, shit! Again, I was going south. How did that happen? Now the storm was getting really heavy and I was getting pretty tired. I sat down and must have passed out.

When I woke up, I was strapped down on a flat table with a bright light shining in my eyes. What do you know, I could just tell it was Santa Claus working on me. Wow! The guy rescues me and can perform medical stuff, too! He must have given me a full checkup because he cut off my arm and a leg and showed them to me before putting them back, good as new. I thanked him the best I could but the best was he gave a ride home in his sleigh! He said it was a new model that looked like a UFO and everything. And he got me back home in like ten minutes flat.

So if I saw Santa, sure enough I made it to the North Pole. Except he didn't look like all the pictures show him to be. He looked more like Abraham Lincoln, if Lincoln was green. Excuse me, the chip he put in my head is telling me to do something. Be right back.