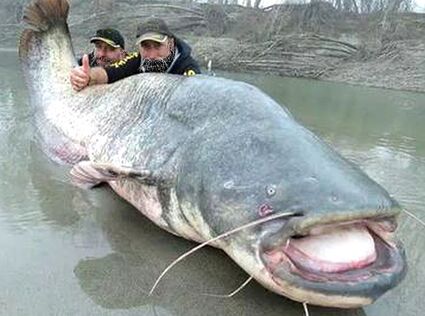 Since hillbillies have discovered airline tickets, they now go to exotic locations like Thailand to noodle. Here, a noodler has caught a giant Mekong catfish. The actual catcher is still inside the fish.

Noodling is catfishing, but with a difference.

For one, noodling does not require a computer of any sort. Nor does it require that you pretend to be an underage girl, though it might help. Instead, it requires guts, low intelligence and a friend along to take videos and to laugh their ass off if anything goes wrong. Thus, hillbillies are at the top of this ever-growing sport, if you couldn't already tell by the name.

The target is giant catfish, who dig equally big holes for nests and stay inside to guard their eggs. So the noodler will look for these holes found down to a depth of 20 ft (6 m). The noodler will then jump in the water and stick his or her arm into the hole as a threat challenge to any catfish inside. If inside and not down at the local library doing a little catfishing itself, the giant catfish will glom onto the arm and it will be a big struggle to get the catfish out of the hole and onto shore without the noodler drowning. No practice is needed for drowning and little practice is needed for catching a really big one. Then the noodler makes a quick trip to the emergency room to reattach any lost fingers or a hand, and that's noodling in a nutshell. Of course, photos are a must or it didn't happen, unlike other types of fishing.

Even little kids are being taught the sport today. They are generously given first crack at a newly discovered hole. This not only teaches them persistence in fighting a catfish, but, if they get eaten, the next noodler that comes along has an even bigger fish to try to bring in.

As would be expected by sane people, noodlers have found that some giant catfish holes have been taken over by muskrats, large snapping turtles, alligators and grey aliens. Noodlers that have been literally deep-sixed in such situations are said to have "retired to that log cabin in the sky with the still out back and the rusted-out pickup on blocks in front". Noodlers from Texas and Florida have now earned more Darwin Awards than the rest of North America combined.