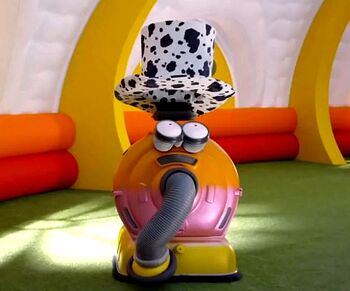 The original Noo-Noo as played by Boy George.

Noo-Noo is the hoover (American:vacuum cleaner) for the Eloi Teletubbies. As they are pretty much incapable of doing much of anything useful, the crap jobs are left for Noo-Noo. However, it is suspected that Noo-Noo is actually there to subtly direct and supervise the Eloi Teletubbies for god-knows-what purpose, aided by the voice trumpets.

Never seen are the battles with the rabbits and their evil leader Satan Bunny. Neither is the effort shown when Noo-Noo has to suck Baby Sun out of the sky and change its diaper.

There have been times when Noo-Noo has gone rogue and was secretly replaced. Most people know of the hat-stealing incidents with Dipsy, but are not aware of the missing orange Teletubby, Flopsy, sucked up during Spring cleaning and never seen again. It is speculated that rogue Noo-Noo is always aided by several thousand clones of a mysterious Agent Smith in both housecleaning and deleting characters. For stubborn and uncooperative creatures like Flopsy are not tolerated in The Matrix, the massive virtual Nanny State owned by Disney and Nestlé.

For those without comedic tastes, the so-called experts at Wikipedia have an article about Noo-Noo, or simply go here.
Retrieved from "https://wackypedia.risteq.net/w/index.php?title=Noo-Noo&oldid=131007"
Categories: