Some people just don't know how to take care of their pets. 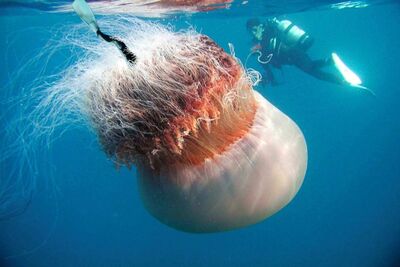 Never disturb a jellyfish when it's feeding.

Take this Nomura guy. Totally clueless, if you ask me. It's like those nouveau riche Japanese folks that just have to have a pedigreed dog but don't bother to learn anything about them. So they feed Rover rice and leave it chained to its doghouse until it runs away.

I can just bet that Nomura found his pet when he was a kid and the critter was cute and tiny. Then he brought it home and told his mother, "It followed me home. Can I keep it?" Obviously, his mother was in a generous mood or something and he got to keep it. And look at it now. It's like over six feet across and like 400 lbs. Dang, it didn't get that way from being fed fish food flakes. That's like those Vietnamese pot belly pigs that start out little and cute, but if you feed them too much, you get a monster. That's obviously what happened here. Not like you could just flush it down the toilet now, can you?

For the religious among us who choose to believe lies, the so-called experts at Wikipedia have an article about Nomura's jellyfish, or simply go here.

Recently, this thing has been seen all over the Pacific Ocean. So this Nomura can't buy a portable backyard pool for his pet? Or maybe he's one of those guys that leaves his back gate unlocked so the critter keeps getting loose all the time. Mark my words, it's gonna cause an accident with a boat or something. Yeah, I'm looking at you, Dominic Schettino.

Catch of the day[edit]