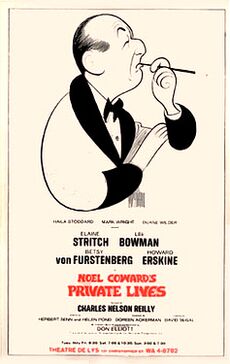 Noël Coward as an old fart.

“Should be Noë Coward. Fixeditforyou.”

“Why am I always expected to wear a dressing-gown, smoke cigarettes in a long holder and say 'Darling, how wonderful'?”

Born Knowell Cowherd to a working class family[4], his mother had theatrical ambitions for him and sent him to a London dance academy to become a dancing fool. Due to partial brain damage when he kicked himself in the head, he acquired a posh accent during that time by hanging out with gay classmates from the aristocracy, as they still all are. After being electrocuted during his performance of The Good Ship Lollipop, he suddenly became the archetypical arch gay with a smart mouth as is expected by normally dull and dreary people of the world and as the kind of person that all gay men think they are. In reality, he began channeling the spirit of Oscar Wilde without the walking stick but with a fancy clipped accent and no Uncyclopedia ties.

In the 1920s and 1930s, Coward began writing and starring in his own comedy plays and musicals. Because of a shortage of cream pies in Britain during this era, he resorted to clever comments and punch lines to carry the performances. He was roundly criticised for doing this as reviewers of the day preferred a good nap during a play rather than being constantly awakened by audience laughter. His performances on and off the stage were further tempered by the 1922 Anti-Prancing Act. While remaining flamboyant in real life, being gay was already illegal in the UK, so Coward felt increasingly restricted in performing and writing.

Bored out of his mind, he then personally ignited World War II. A few double entendres thrown around were misinterpreted by Germany, and just like that, Poland was invaded. This allowed Coward to hit the road and entertain the troops wherever they might be. Many soldiers can remember Coward lugging a piano through deserts and jungles and braving the lack of good tea and biscuits. Whilst some troops were initially angry that he wasn't singer Vera Lynn, Coward won them over with music hall-style singalongs and snappy insults about General Montgomery. However, despite all his volunteer work, he was at odds with Winston Churchill who wanted to drop Coward playing his piano onto Hitler at the latter's Berghof retreat.

The wartime experience led Coward to add a few new songs and start a career as a one-man cabaret performer. By the mid 1960s, the retired Coward was finally fully recognised with fake praise and imaginary awards given by people who had never seen one of his plays and never heard one of his songs. Except for Monty Python and Liberace, that is.

For those without comedic tastes, the so-called experts at Wikipedia have an article about Noël Coward, or simply go here.
Retrieved from "https://wackypedia.risteq.net/w/index.php?title=Noël_Coward&oldid=142568"
Categories: