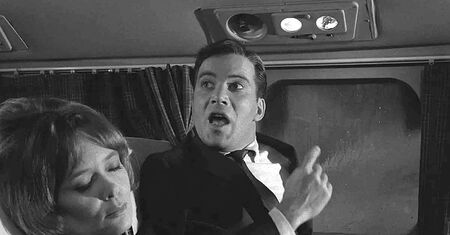 Quick! Get that man a sedative before he chews a hole in that expensive scenery!

So there I was, working out on the wing of an airplane as usual when I happened to look inside and there was William Shatner! I'd recognize that toupée anywhere. He was right in the window seat over the wing. So I leaned into the window to say hi and he just went all freakazoid on me. At first, I thought he was just playing around because his acting is pretty bad and he knows it. But then he started getting scary and it weirded me out so I backed off and hid.

So I peeked back in and he was staring right at me, pretending to be scared again. Now that's pretty cute and all, but he's all bug-eyed and pointing at me and really spazzing out. Maybe he was on meds or something but I can tell bad acting when I see it.

Just then, I heard something wrong with with the engine so I went to check it. Well, little did I know, that Shatner dude had a gun! He actually opened the emergency exit and took a couple of pot shots at me! Like he can hit anything what with the slipstream and all. So I got out of there quick! Unfortunately the drummer from Anthrax was a little slow bailing out and his drum kit messed up the cowling around the engine. Nobody's blamed me for it so I think I'm cool.

It's not easy to be a gremlin.