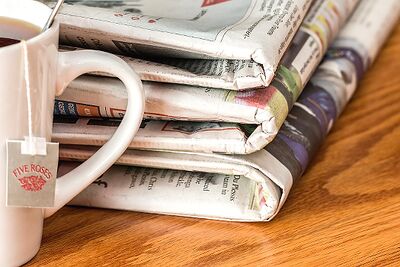 Unconfirmed reputed image of what supposed newspapers potentially looked like.

A newspaper was a now-obsolete object made from something called paper, also obsolete itself. It could be delivered daily so that its parts, or "pages", could be used as a garbage can or cat box liner. Legend has it that it had writing on it that supposedly told about current events. This remains unconfirmed, as everyone just looks at pictures now and does none of this so-called "reading". in addition, old movies always show these newspapers spinning and stopping, which must have caused many a headache and even whiplash back in the day.

Parts of it would be used instead of blankets for rugged city outdoorsmen. The ink that scientist have reported to be on the newspaper would transfer to their skin, allowing small children passing by to read amusing pictures that were called "comics".

It has also been reported that what are called tabloids were once newspapers. This includes such major pillars of the community like The Sun (UK) and New York Post (USA) which are now colorful picture books used to entertain caged pets.

Supposedly, newspapers resulted in an informed public that could make critical decisions. Luckily for us, Vladimir Putin and his pal Hypnotoad tells us everything we need to live in squalor and iggorants. God bless all three of them!