New Monaco (also known as Monaco 3.1) is the newest version of Monaco. Distributed by the Wikia Bottling Company. This version of Monaco is better then Old Monaco and as such, everyone likes it by default. Wikia has stated that since everybody loves new Monaco, that they've discontinued the old version of Monaco. Everyone rejoiced over the discontinuation of Old Monaco as since everyone knows that new stuff pwns old stuff by a number of 3:2. It's a known fact that everybody loves New Monaco, There are people who don't love New Monaco but that's just a myth. Everybody who doesn't love New Monaco is sentenced to give Satan baths and be forced to experience hell unlike any other. It's the truth. NEW MONACO SUCKS! NEW MONACO ROCKS!

Okay so here how it went down. Wikia Bottling Company had almost 10,300,000 "users" and over $1,300,000.99 in "budget". One day, they decided that they need more money. (case in point, just $1 extra dollar) So they spent mere days on thinking what they should introduce. When one person, Mr. Sr. Jimbo Wales III Jr. (who was only 3 months old at the time) submited what appeared to be shit on paper and they loved every bit of it. On June 6th, 2008. Wikia announced that Old Monaco would be replaced with New Monaco which sent fury of joy everywhere. Even in Japan. Wikia also announced that every wiki will have New Monaco set by default as they figured that every person would love New Monaco. A thread was started up dedicated to New Monaco and everybody liked it, everybody. Nobody didn't like it, everybody liked it. And that is how the story of New Monaco was created. 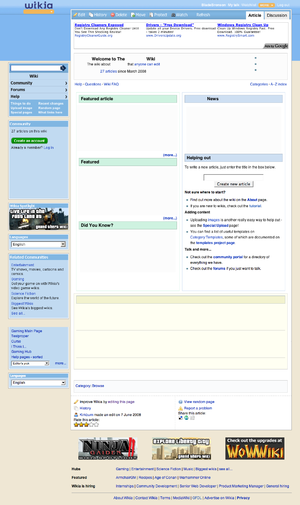 “Mirror Please?”
:~ A Wiki on how good he looks because of New Monaco

New Monaco is vastly superior to Old Monaco. Because it has additional features which everybody likes, which is documented in the following list.

*it's not free you idiot 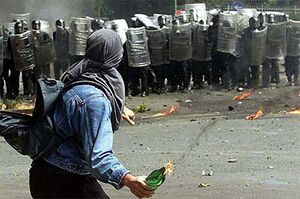 A riot on New Monaco. If they ever existed.

~ A very hateful person if they ever existed

Criticism, what you talking about? There's no criticism you idiot. Criticism is a lie invented by Satan so he can control us. There is and there has been no criticism for New Monaco. Evar! If there was criticism, then it would not exist cause it's a lie. You see these people hating New Monaco. In secret, they're loving it and they're sharing it with their friend too. If there was a guy who hated New Monaco then they would be in hell listening to the worst music ever. If you hated New Monaco, then you would be listening to Kevin Federline Playing with Fire or Ayumi Hamasaki trying to be Guilty, a true nightmare. There was an isolated incident, you see those people booing in the baseball stadium for ads for New Monaco. They weren't booing, they were cheering. Booing is appalling something, cheering is bring something on, there's a difference. We didn't kill your old family member, you killed him for not liking New Monaco. If there was any criticism, then this product would face major backlash. But since we are Wikia, we say there is no criticism, and there isn't any!

New Monaco has been extremly well recieved everywhere in the world. Ebert & Ropert give it 2 thumbs up saying "This is the best tasting soda I have ever tasted, ever." Even though it had nothing to do with movies, it was apparently well recieved due to the fact that these 2 guys reviews are pure and the c00lest guys evar. Mantiwhore said it "Was the greatest thing evar made, I love the advertisements. Very nice and very whorey". There were other reviews but they were too good and too many compared to New Monaco. Case in point, New Monaco is the best thing ever because every review is good. The taste has also been excelent, because it's made from Wikia and anything from Wikia is automaticly good. It has been rated 100/100 or 5/5 or 10/10 by every media source that has ever existed, due to the fact that there is no freaking criticism whatseover. If there was criticism the product would suck but since there isn't the product is good automaticly. No questions asked!