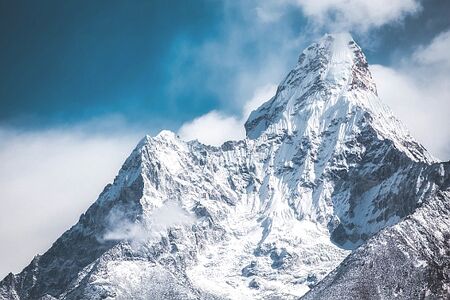 Nepal is up there somewhere.

If you've ever wanted to learn to fly, Nepal is the place to be.

The reason is that there is no other way to get around. Since Nepal is up in the Himalaya Mountains, the land is constantly shifting and earthquakes are common. So roads are always falling down the mountainsides all the way down to India, where they are happy to get them. Walking up sheer cliffs is another small problem in Nepal, particularly for those with bad balance. Therefore, anything and everyone depends on flying to get around.

One would think that everybody has a quadcopter attached to their heads and in some cases. that would be right. However, strong winds prevent good control and eventually even the best quadcopter fliers end up up in China, or worse, China. Even helicopters attached to the head have problems due to the very thin air in Nepal. Therefore, Mary Poppins is unable to visit the country, which is just fine with most residents.

So Nepalese have depended on traditional methods to fly. And that is by the use of the ancient art of Trance and Dental Meditation. Sitting cross-legged while wearing headphones and brushing or flossing their teeth, people listen to (for example) Paul Oakenfold and Daruda. After practice, people can hover then eventually fly. It is important that fliers listen to extended mixes since when the music stops, the ability to fly also stops. Steering is achieved by leaning and farting as done in normal car driving.