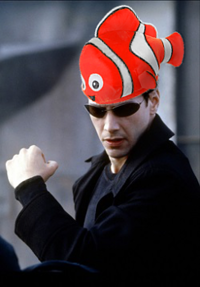 In some strange way, Neo's version of reality is almost correct.

Neo is the one. Then one is the Neo, right? It just follows logically.

Neo is a guy that can't decide if he wants to live in The Matrix or not. You can't blame him. Apparently The Matrix is just like Japan, where you can get just about anything from a vending machine and is a place where they really like robots. However, all that shifting between realities plus pill usage encouraged by that Morpheus guy has definitely fried his brain.

The poor guy keeps insisting he is lost (he sure is) and is some kind of fish looking for his family. And everytime he is sent into The Matrix on a mission, he gets distracted and ends up wandering around at Disneyland. Can't blame him too much, though, since he can cross dimensions and sneak in for free. Still, by just meeting him, you get the idea he is a couple of garbanzos short of a three-bean salad. He speaks by mumbling, wears dark glasses even at night and keeps getting into fights with the same guy over and over. So if you see him coming, making whooshing noises since he thinks he's flying, give him a wide berth.

For the religious among us who choose to believe lies, the so-called experts at Wikipedia have an article about Matrix mumblers, or simply go here.
Retrieved from "https://wackypedia.risteq.net/w/index.php?title=Neo&oldid=140893"
Category: