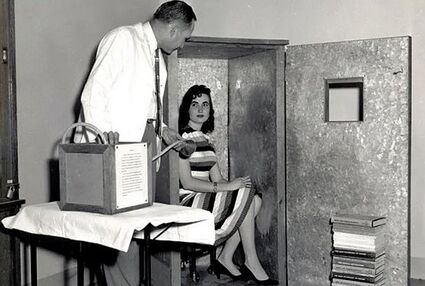 A researcher prepares to leap into a Neat-O-Matic holding a test subject in order to determine how many orgasms can be had or how many kicks to the crotch can be landed in one hour's time.

After the banning of Wilhelm Reich's Orgone box and his subsequent burning at the stake as a witch, its rights were up for grabs and were bought by the Wham-O Company, famous makers of the Hula Hoop, Napalm in a Box and other toys. With minor modifications, they turned the Orgone box into a device they called the Neat-O-Matic. It was intended to provide a wholesome '50s experience for every family member, advertised as "Disneyland in a box".

For children, it provided the same experience as a timeout in the corner producing quiet and sullen '50s children. In fact, some kids were left inside until adulthood, fed via a tray slipped through the handy slot in the door. 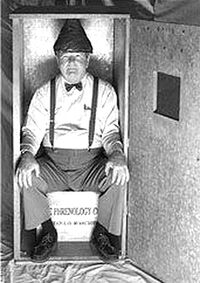 Meanwhile, adults would use it for kinky sex in various positions just as they do today except not posting the act on YouTube and social media. Wham-O sold millions of Neat-O-Matics around the world and interest in the device would continue for many years. However, when making them inevitably went to factories in China in the 1980s, Neat-O-Matic manufacturing specs changed drastically. Suddenly, people using the machines were being converted into Devo fans en masse (see photo). So, the US Food and Drug Administration pulled all Neat-O-Matics from the market and the US government exiled Devo to Wake Island in the Pacific.