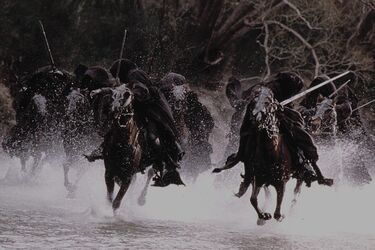 It was a dark and stormy night. The wind howled and the rain spattered down unceasingly.

Meanwhile, Johar was safe and dry in his little toy shop in Bree, tidying up and putting away newly delivered stock. He had just rearranged a shelf in the back room when the bell above the front door rang, and rang more than once. I locked that front door! I'm sure of it! he thought as he rushed out to shoo the visitors out, since it was well after closing.

He stopped dead in his tracks as the dreaded Nine, the Nazgûl, were standing before him, clad in ragged black robes as was told in legend. And here they all were! The one in front looked to be coldly regarding Johar though the creature had no face. The others were behind, apparently looking around for... something.

The wraith leaned over toward Johar and Johar could feel unbelievable depths of icy coldness, but was too frightened to move. "We are... looking for... little people," the cloaked being rasped harshly.

Suddenly, one of the other Black Riders spoke up. "My king. There."

In a flash, their leader had snatched a box off the shelf and thrust it at Johar. "How much is this?"

Johar managed to squeak out, "4 silver pieces, my lord."

The horrible figure extended a ghastly claw and dropped four ice-cold silver coins into Johar's hand. "A plastic bag would be appreciated on a night like this," it added.

"Of course, of course!," replied Johar. As soon as Johar slipped the box into the bag, all nine were outside and gone as silently as they had come.

Breathing a sigh of relief, Johar went to fetch the bucket and mop to clean up the water that the Nazgûl had tracked in. He wondered, Just why did they need to come out on a night like this? And just for some Lego figures?