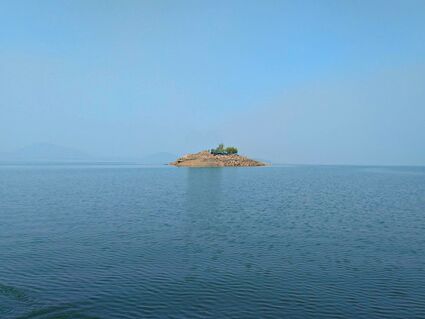 Nauru is an island in the middle of nowhere. It has a lot of vowels in it because it can.

it is out in the South Pacific pretty much all by itself, just a dot 21 m² (8 mi²) How anyone could find it is a good question, but people do live there. The lost Melanesians and Polynesians who missed Tahiti found themselves stuck there until the Germans and Australians came along later to tell them how to set up multilayered governmental systems with bureaucracies to properly licence and manage coconut trees.

Nauru's major export is phosphate and only industry is phosphate mining. The mineral is loaded on ships and taken to Australia and used for fertilizer. Today, all the phosphate is mined out. So Nauru is now a big hole with people living around the edges with the edges not being very fertile. Any farm is on the shoreline that is eroding due to rising seas. If only the Nauruans had some phosphate so that they could grown stuff on the remaining land.

Since Nauru is now such an appealing place, it rents itself out to Australia to house refugees landing in Australia. Because cooties? Australia carefully drops off its refugees a few kilometers offshore, carefully equipped with a pool noodle. The swim allows refugees to get out the kinks out from the long ride from Oz in the ship's bilge. Ironically, many of those refugees originated from Nauru.