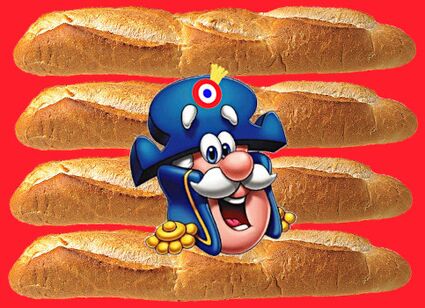 Napoléon drew the wrath of European monarchies for suggesting that common people should eat bread instead of gruel. Of all the nerve!

Napoléon Bonaparte was the guy who conquered most of continental Europe. No, not the German guy, silly! That was Adolf something. We're talking about the French one.

As an officer in the French army, he was the guy who said "An army marches on its stomach". So he was the first general to provide cummerbunds to his troops with tender tummies. In the French Revolution, his troops foiled a major attack by royalists which would prove to be so fun that Napoléon would decide to do it over and over in future years. A bad experience with a stale Sacher torte led him to war against the Austrian Empire and their pastry-loving Italian buddies.

With the support of the French army who really liked their cummerbunds, Bonaparte led a successful coup when government leaders were out marching in solidarity with workers striking against the government. A non-royal coming to power in France pissed off a whole bunch of tinpot monarchies like the United Kingdom, Russia and Prussia. To finance their war effort, the latter group had acquired an advertising deal with Target stores where their soldiers would wear the Target logo, with unfortunate consequences. Napoléon and his allies beat them soundly. A common sight afterwards was captured soldiers being sent home wearing shirts that read "France beat my ass and all I got was this lousy T-shirt."

Invasions of Spain and Russia proved to be the downfall of Bonaparte, after which French soldiers and cummerbands were in short supply. The gang of monarchies invaded France, with Napoléon not mysteriously found riddled with bullets but exiled to an island called Elba. He quickly escaped and hastily assembled an army fully equipped with cummerbunds. But he was defeated absolutely at the Battle of Waterloo as reported by the Swedish historians ABBA. Napoléon was once again exiled (why?) to the truly distant island of St. Helena. It is a place so remote that Napoléon Bonaparte may be living there today, for all we know.