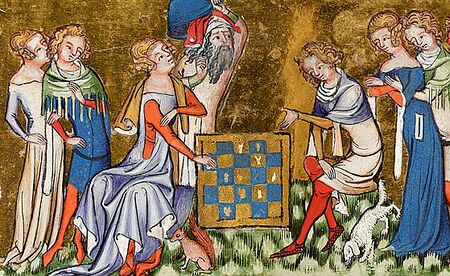 With Naked Santa looking on, players enjoy the new game they received from him. Historians generally believe this to be an early form of Monopoly.

Little do most people know that the Santa Claus we know today originated in the Middle Ages. Nor do they care very much, either, as it turns out.

Nonetheless, it was in France some time before the Norman conquest of England that a thin, bearded old man without a stitch of clothing would show up on people's doorsteps on Christmas day with gifts. There would be toys for the children and games for the adults. Try as they might, they could not identify which big box store the gifts had come from. This was because the presents were all handmade by Smurfs living in the forests under contract to the old man. Some Hello Kitty fans and bronies were disappointed but found they could trade their gifts to their local church in exchange for absolution of a sin or two. Priests would then sell the items for huge prices to the local nobility describing everything as being rare collectibles. Few exist today since the nouveau riche would always break their new toys in a heartbeat, just like today.

Rumors abounded as to just who this well-endowed (financially and physically, according to contemporary reports) man was, who became known as just Naked Santa. He was thought to be an escaped mental patient who didn't like the itchy woolen clothing of the time, some kind of loony from the royal family or possibly an English spy trying to undermine the French toymaking business. He was even thought to be a giant werechicken looking for a warm place to lay its eggs since a few people swore that they could see a zipper when Naked Santa turned to leave. His nakedness was also a subject of discussion, with him often walking many leagues through snowdrifts to deliver his gifts. In fact, the story of Santa and the North Pole comes from reports of those seeing Naked Santa's wang in all its glory. In any case, people in turn began giving Naked Santa mead and small cakes in appreciation, similar to us having the kids leaving out a small amount of rock cocaine and a bottle of Jack Daniel's for Santa.

Today, Santa Claus is the celebrated icon of corporate greed and consumerism in most parts of the world. However, tradition is still strong in some rural French villages where residents will strip an old man naked on Christmas and send him out into a snowstorm with a bag of recycling in commemoration of Naked Santa.