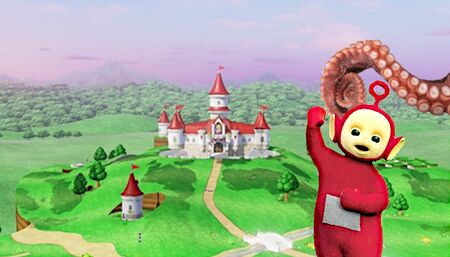 A view of the Mushroom Ki... Wha? Where the hell are we, anyway?

The Mushroom Kingdom is a country located somewhere in the back of beyond near God-knows-where. As it is constantly at war with somebody or the other, news reports of the country appear on televisions everywhere. Those battles are considered so important that coverage appears even on game consoles with screens. Go figure.

The kingdom is ruled with an iron fist by a hereditary monarchy, currently in the form of Princess Peach, regent for her imaginary father. Its stated purpose is to instill in children the value of absolute monarchies and blind obedience to royalty. It also exists to get people to eat more mushrooms, psychedelic and otherwise. It is under constant attack by Commie forces led by one Bowser who is stupid enough to sometimes actually join forces with the rulers to oppose outside invaders. This conflict has laster longer than the US involvement in Vietnam and Afghanistan combined. This is fueled by ethnic conflict between the Toads (Japan: Kinopio) that make up the royal army and Supah Koopa Troopas, creatures of dubious turtle heritage with ABBA somehow being mysteriously involved.

The wars are all-encompassing, with even local plumbers getting involved as mercenaries. They carry no insignia and so are thought to be the false-flag Little Green Men reputed to be from a supposed country called Russia Maybe. They are often seen just running around without weapons and could be mistaken for video game characters if you weren't careful.

The Mushroom Kingdom has followed Nicaragua and adopted Bitcoin as its currency, since its previous coinage based on the gold standard tended to spin and float in the air.