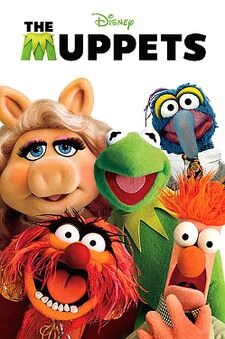 Disney has licensed the likenesses and voices of washed-up politicians like Hillary Clinton (upper left) and various hacks fired by Donald Trump.

The Muppets are puppets created and realized by Jim Henson and various collaborators.

Early on, Henson came up with idea of cloth and foam puppets that could be more expressive than wooden-headed ones. Besides, the latter were already too well known as dictators of South American countries. However, he found it difficult to manipulate puppets to his liking by himself. He tried using assistants like his wife, but after a performance, both would be black and blue from smacking into each other. Frustrated, Henson became a mime for a while but found he was allergic to makeup and berets.

Then one night, he was sleeping fitfully when a bright light shone through his bedroom window. Unable to move, Henson was lifted in the air and passed out the window and into the air. He realized that he had been abducted by space aliens and wished that they had opened the window before taking him. His thoughts then turned to the possibility of probing and dissection as had been so commonly reported.

Still unable to move, he could see one of his captors, something of a cross between mogwai and a very small teddy bear. It looked his way, punched a button, and Henson was able to move. But he was still confined in a force field of some sort. Henson immediately blurted out a joke about Star Trek out of nervousness and got a laugh from the alien crew. More joking and he had them in stitches. To his surprise and amusement, they told their own jokes and one-liners in perfect English. This continued back and forth for some time. Ever the quick thinker, Henson proposed that they return to Earth where their comedy skills would be fully appreciated.

Henson's plan was that an alien would sit in a puppet head and move it to get facial expressions. They were to ad lib their own lines while Henson would manipulate arms and the body. These puppets would be dubbed Muppets. And while Henson is credited with using small monitors to observe how Muppets appeared to audiences, he was actually watching PBS and old movies while the aliens goofed around, accounting for the free-form nature of Muppets humor. Henson used fake puppeteer names like "Frank Oz" to hide the fact that he was working with aliens. More aliens joined the original group, sometimes presented as Henson's children in remarkably lifelike full-body suits.

Oddly, the most famous Muppet was a full-body one operated by several aliens that went rogue. This was George W. Bush, aka Dubya, who became president despite not having a birth record and glowing in the dark. They became famous for "Bushisms", stupid nonsensical remarks that were never about anything in particular. Their prank of invading Iraq would go down as one of the great comedy achievements of all time.

Now that the Disney Corporation has taken over the Muppet franchise, all the aliens have been deported and replaced by audioanimatronics, since machines don't need to be paid salaries nor take vacations. Disney plans to add new Muppet characters, including Kimble the White Lion, Teen Teen the Belgian, and the Incredible Muppet Fetuses featuring Britney the Burned-out Skank.