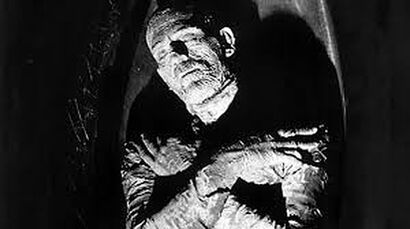 Proof that mummies are dangerous. Note this one making a gang sign – Thebes in da house, yo!

A mummy is one of those dead guys wrapped up in bandages.

In ancient Egypt, every kid was out going for merit badges in the Boy Scouts, Campfire Girls, Hermaphrodite Guides or what have you. And the prize was always the first aid badge. So they would find dad asleep on the couch on weekends after a hard week of rowing barges or picking cotton and use him in their quest to earn that badge. They would wrap poor old dad up in bandages, then carry him over to their advisor for proof. Most of the time, the kids would be so happy on getting their first aid merit badge that they would forget their father and leave him behind. Since it would pervy to search the wrapped person for ID, scouting leaders would just store dads until they were claimed. The storage places are what are know as the pyramids today.

Well rested after a few thousand years but still with a bit of muscle stiffness, these so-called mummies would shamble out of the pyramids or museums in search of a cold beer. This would terrorize everyone else, especially Brits, who drink their beer at room temp. No need for panicking except for those smartasses playing at being a wit in the style of Noël Coward, which could get them strangled regardless.