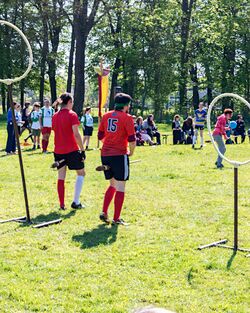 OMG, they actually did it. Will this madness never end?

Muggle quidditch is the new sport sweeping the world. Please stop it. You are embarassing the human race in front of our reptilian alien overlords.

In case you need a reminder, quidditch is the broom-riding game played in the Harry Potter franchise. Why it is held in a stadium is anyone's guess since players can go just about anywhere. And muggles are non-magical people, which is everyone except for about six people on Earth. One of those magical folks works on the 33rd floor of the building where I work. But it looks like she'd never be allowed to touch a broom much less play quidditch. I know this from the times I disguised myself as a window washer to spy on her.

Anyway, muggle quidditch was invented by Harry Potter LARPers who were running around like idiots with brooms between their legs. Several of them crashed head-on into each other, causing major concussions. The resulting fuzzy thinking led them to create a game that could be played without having to actually fly. Its rules closely match that of the Harry Potter game. That is, except for the flying part, which was what we thought was the whole point:

While you remove those crotch splinters, read[edit]