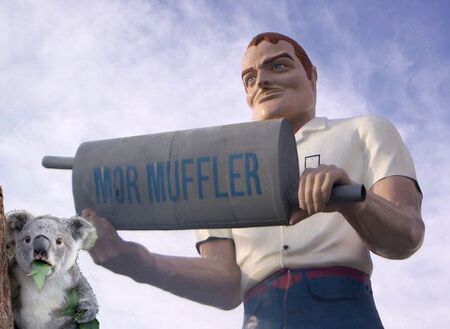 A Giant American koala realizes too late that a Muffler Man has found him.

This giant bipedal species stood 20 ft. (6 m.) tall. It roamed throughout North America until fairly recently so much is know about its behavior. It was a tool-making and tool-using hominid, with the giant car muffler its weapon of choice. This would be made in Muffler Man's muffler shop with gigantic tools. Otherwise, Muffler Man only built and owned its own shop, leaving installation of smaller mufflers in human-owned trucks and autos to its cowering human minions.

It would use a giant muffler to hunt its only prey, the Giant American koala (Fuzzibus magnificus). That species arose from koala eggs riding in on shipments of eucalyptus trees to America and exposed to nuclear bomb tests. It morphed into giant size due to lack of competition and became a pest, destroying cotton candy machines and blimps for reasons only known to itself. Thus it was only luck that a native creature like Muffler Men decided to prey on Giant American koalas to keep them under control.

Eventually, Muffler Man would shun fast food and only feed on koalas. However, they were such efficient hunters that they wiped out the Giant American koala. Muffler Men attempted to adapt by eating normal-sized koalas found in zoos, but those koalas were not only too small to provide enough nutrition but would get stuck between the teeth of Muffler Man, causing slow death by tooth decay.