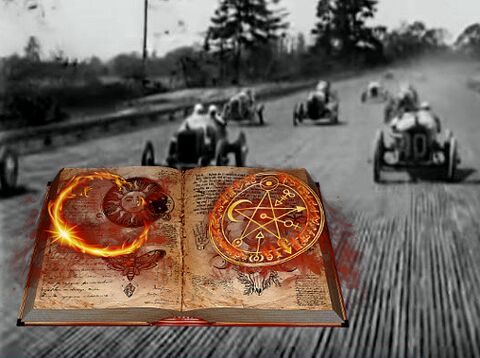 Once an auto racer's maps reference, The Compendium is today a full travel guide complete with a convenient array of spells and curses to be placed on obnoxious waiters and innkeepers.

The Mowbrey-Blessed Auto Rally and Travellers' Compendium is the foremost traveller's guide in the United Kingdom today.

First published in 1911 as the Mowbrey-Dongleworth Velocipedists' Blue Book, it was initially intended to provide detailed maps of roads that could be used for motorsports. Racers could then charge along at speeds up to 35 mph with confidence, racing against horses, the Beast of Bodmin Moor and other legendary creatures, and now only occasionally plowing into flocks of sheep blocking country roads. However, racers might find themselves far from home and at the mercy of pirates and dustmen. Therefore The Compendium, as it is known, expanded into a lodging, pub and restaurant reference, rivalling the Zagat Guide. Its favourite feature was the pointing out of establishments that had easily escapable back windows, a boon for tightwad racers.

Eventually, its editors went totally round the bend but thankfully became OAPs and retired from The Compendium. It was not until the 1990s that world traveller and Britain's own kaiju Brian Blessed took the helm and overhauled the whole thing. It has now been thoroughly updated with the Brian Blessed touch.