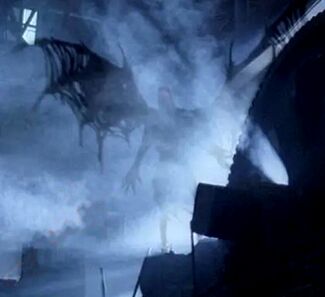 Dramatically lit, this is either Mothman, or Batman after crashing into a patio unbrella.

Mothman is a legendary cryptid originally sighted in Point Pleasant, West Virginia in 1966.

Standing anywhere from 6 to 10 ft (1.8 to 3 m) tall, Mothman is a human-like creature with large wings, reported to be able to fly 100 mph (160 kph). After that, descriptions vary. This means that either Mothman has a pretty big wardrobe that must require custom tailoring, or there is more than one type of giant flying humanoid thing that went unnoticed before 1966. Keep in mind this was well before the days where you would see cosplayers LARPing around everywhere.

Because of its lack of earlier history, some are blaming toxic waste from a nearby army facility on Mothman's origins. However, the glowing three-headed penguins and talking trees that live there today deny seeing the creature before its first sighting by humans.

Mothman is also either thought to have been responsible for the collapse of the local Silver Bridge, or was there to warn of its imminent collapse, or perhaps even none of the above. Thus he gets a measure of both fear and respect from the town of Point Pleasant, who has commemorated the creature with a statue, a festival, and for some reason known only to their tiny minds, a pancake-eating contest.

Mothman has been thought to have been mistaken for:

For those without comedic tastes, the so-called experts at Wikipedia have an article about big bugs in West Virginia, or simply go here.

After all those theories, a winged humanoid isn't such a weird idea after all. Just to be safe, if you leave your back porch light on at night, leave out a stack of pancakes for Mothman who has now been recently sighted in the Chicago area.

In 2018, the people of Point Pleasant blocked the state's attempt to hang a giant bug zapper above the town.