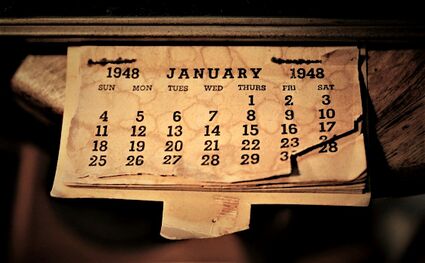 Don't waste money and paper, just re-use the same calendar page every month until it crumbles to dust.

A month is a really arbitrary period of time. Just look at any calendar. Months can be any number of days long. Who the hell decided that? And they still can't make up their tiny little minds up about February.

Now you might think you can figure months by how many weeks are in them. Well, no, since weeks themselves can be any length what with the additions of Hump Day, Taco Tuesday, etc., etc. So you might try to figure months by the number of days in them. But what about the nights? Forget about using minutes, since nobody is able to count the theoretical number of minutes in a month.

These days, months are still usually named after Romans. There is July for Julius Caesar or Julie Andrews, Octodest for the famous kraken Octopus Rex, May for Caligula. There have been attempts through history to change those names, like during the French Revolution. Unfortunately, people grew tired of using the accompanying obscene gestures when saying the new names and returned to the Roman scheme. More recently, self-styled geniuses continue the idea of changing the names of the months – see below.