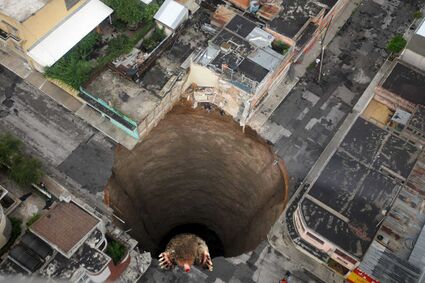 Moles are your underground enemy like zombies or your weirdo neighbor trying to steal fruit from your backyard trees. These backyard menaces use stealth mode to eat the earthworms in your garden or yard. Guard pitbulls merely disappear into the holes and tunnels dug by moles. Therefore, hand grenades are always best for mole control. Cruise missiles are considered overkill, but do work wonders on heavy clay soils.

Suburban gardeners hate moles for tearing up their perfectly useless gardens and lawns. Doctors love the little critters since humans will trip over mole holes or collapsed tunnels and will break an ankle. As nothing can be done, clumsy humans are euthanized on the spot.

Despite Michael Bay-type asplosions or a determined Bill Murray mistaking them for gophers, a few moles always survive and thrive, continuing to grow to ginormous size. Since moles always gotta dig, these monster moles will tunnel deep into the Earth, eventually hitting plumes of magma aka lava. Luckily for them, moles are fireproof. Unfortunately for us, our houses and our bodies are not. Check the little tag on your hip if you don't believe that.

Humongous moles will come up to the Earth's surface, creating their molehills known as volcanos. These piss off suburban gardeners even more because they are unplanned garden features that clash with their backyard theme. Otherwise, you and your house can be undermined and sent plunging thousands of miles underground. There, moles will have followed you only to ask, "Didja see any good worms on your way down?"

People talk about making mountains out of molehills when it is the other way around. Ginormous moles are mostly active along the Pacific Rim, though they didn't appear in the movies of the same name due to licensing conflicts. The area is now called the Ring of Fire, named in the 1960s by scientists led by Prof. Johnny Cash.