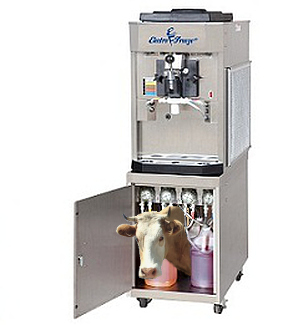 You've probably had a milkshake recently, especially if you go for fast food.

But have you ever wondered about that machine that you see is used to make milkshakes like magic? Of, course, you've seen the server mix syrup into a white base material to make various flavors. But haven't you wondered where that basic nearly frozen stuff comes from? You might guess it's just gypsum and ice cubes found on the street mixed together, and you'd be right in most cases. But the secret is in the machinery, which we will explain as quickly as possible, as you probably want a milkshake right about now.

The relatively bulky cabinet hides the secret to nice thick shakes. And that is, it is a refrigerated enclosure contains a Midget Patagonian cow native only to that very cold part of the world. Those cows are known to produce extremely thick milk but can only do so at temperatures near freezing. They have been trained to be milked on demand, and produce enough so as to require just one Midget Patagonian cow per restaurant. If you have seen a fast food employee standing on the tiny lawn in front of a restuarant with a dog on a leash, look again. You will find that the "dog" is actually one of those midget cows grazing on the grass. But approach with caution. A herd of Midget Patagonian cows can skeletonize several piranhas in under 30 seconds.