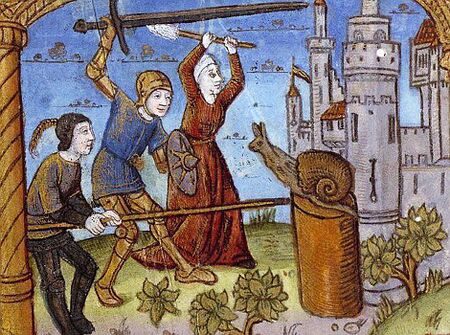 People in the Middle Ages hated bunny snails, driving them to extinction.

The Middle Ages (about 400 AD to about 1300 AD) was the period of castles and knights in Europe, and the era for Europeans and everyone else to try to destroy castles and knights. Peasants were only grudgingly allowed to participate as meatshields, and late in the period, as cannon fodder.

You would have to ask:

Some scholars would say the answer is 42. Others would say it's none of your damn business. A select few would just glare at you without saying a word, as if you had a booger hanging from your nose. In fact, you do, so wipe it off and let's continue.

By this time, the Roman Empire covered most of Europe, much of the Middle East plus North Africa along the Mediterranean. However it was ruled in sections by emperors who didn't like the others, not to mention wannabes and non-Romans waiting to get their licks in. Without frequent flier miles to tap, the emperors just fought whoever was nearby.

This was a time much like today. That is, there was constant warfare and disease running wild everywhere. Like today, everybody wanted to be a king or knight or thought they were. However, in reality like today, most everyone was a peasant whether they thought they were or not. One wonders if forward thinking folks in the Middle Ages LARPed phone call center operators and encyclopedia salespeople.

In parting, we remind you of the uplifting quote used during this time: