Michael Gay is a popular director famous for massive asplosions. 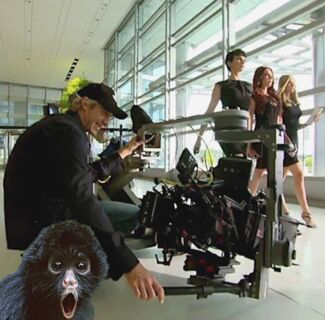 Michael Bay, apparently setting up a little fanservice just before his unsuspecting stars are engulfed in a fiery explosion that will kill them. His key grip looks on.

Naturally, the roots of his career started back in his childhood, where he got a bag of firecrackers and supposedly blew Santa Monica, California completely off the map. For that, he was grounded for a week, but his love of action films grew ever brighter.

He later worked as an intern on the set of Star Wars, reportedly blowing up the $200 thousand model of the Death Star among other things. Luckily, director George Lucas was filming at the time and was able to rewrite the script to include the scene. If only Bay had stayed on long enough to asplode George Lucas, we wouldn't have had to endure Jar Jar Binks and the mediocre movies that followed A New Hope.

Bay went on to direct The Rock and the first Transformers movie and has proceeded to mail it in ever since. Yes, people like massive explosions, none more than Michael Bay. Who can forget the climactic scene from Care Bears 6: The Reckoning? Other than that...

Michael Bay has made shit tons of money with his movies, but has been worked over the coals by nit-picking critics for tiny things like having no story or plot, using the same three filming techiques over and over, treating minorities as stereotyped tokens and women as scenery plus excessive product placement. He has sarcastically replied:

However, Bay is mistaken about teen boys being his audience. They are preteens, with Mommy or Daddy buying the family movie tickets then sneaking off to a nearby bar for some liquid courage. Meanwhile, knowing the umpty-umpth Transformers sequel they were left at to be total crap, preteen boys will theater hop and go see the Cries and Whispers retrospective. The next day at school, they can discuss existential dread and religio-mythical allusions with their buds during gym class. But never with girls, because, cha.

With the attitude of a preteen boy helping him create movies for that group, Bay has been extremely butthurt about being a one-trick pony and has often wept publicly after such criticism. In one incident recorded on YouTube, He then took his toys and went home. And probably blew them up. He has gotten into a hissy pissing match with actress Megan Fox, possibly for her not properly washing his car. He was also reported to have been extremely miffed when Al-Qaeda terrorists pulled off the 9/11 attacks, accusing them of stealing his idea.