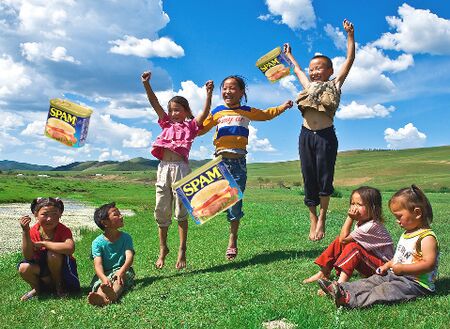 These Mexican children are enjoying a jumping game with feral cans of jumping Spam.

Mexican jumping Spam is a phenomenon noted along the US-Mexican border, where supposedly normal cans of Spam will repeatedly hop up to 10 feet (3 meters) into the air.

When these jumping cans are opened, the hopping stops and nothing like an Alien facehugger or other animal can be found inside, unlike Mexican jumping beans. Originally, it was was thought that observers were talking about the ammo cans also opened by keys or pull tabs that had spontaneously exploded. But this was not the case.

After careful study, it was not until 2007 that Spamologists found that brujos, or wizards/witches were responsible. Those mysterious legends of folklore normally hide themselves away in remote locations in the Sonoran desert in northern Mexico. There, they practice all kinds of spells and curses that are keenly studied by Japanese video game makers like Shigeru Miyamoto. However, there are enough brujos today that magic leakage is inevitable. This includes turning pot farmers and drug mules into potted plants or little burros pulling carts with tiny cacti in them. But the other major effect was the enchantment of Spam being canned in a factory near the border. Thus Mexican jumping Spam was created, today being imported around the world as a novelty that is not only fun and edible but can knock you out if you stand too close.