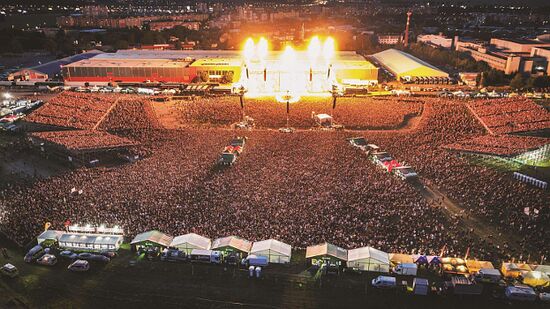 Metallica is a western European religion founded in the 1980s, but claims to be an ancient oriental religion founded on philosophy in the 600s. Their followers are known for being pointlessly vitriolic towards followers of other religion whilst not realising that their religion sucks.

Music is an important part of this religious movement. Metallica has been described as being a technical type religion which has to do with their version of Morris dancing with its extremely intricate steps and moves. There is also apparently the use of bells in its sacred music, with many adherents reportedly "taking huge hits off a bong", referring to striking a large bell at regular intervals to induce a trancelike state. Fire worship may also be part of Metallica, since every service ends with its followers lighting lighters or sticks of dynamite.

Instead of a single pope, Metallica has a tetrarchy guiding its adherents. They are known as The Hetfield, Lars, Kirk and Robert. David was once part of the church leadership but broke off from the Metallica movement to form the cultlike Megadeath religion. Other significant figures in the pantheon include Cliff, Jason (not that one), St. Anger, the mysterious N. Tour Sandman, the Master of Puppets and Lulu.

Metallica has had major philosophical conflicts with Napster worshippers and Megadeath followers over the years. Parents have attempted to sue the religion for their kids' broken fingers and wrists suffered from playing Guitar Hero: Metallica, an instructional tool derived from Metallica scripture. Yet it lasts to this day, much longer than the cults known as Beatlemania and Aum Shinrikyo.