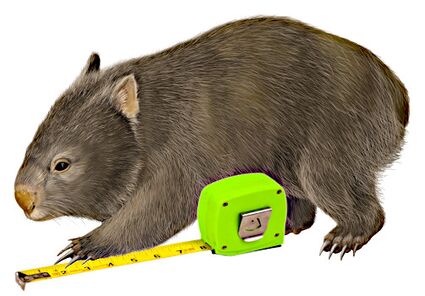 The wombat is the only species that still knows how to do proper measurement. Note that the animals are still using inches and feet instead of the metric system.

Measuring was an important art now nearly lost in the mists of time.

In the United States today, since everything is premade in China, there is no need to learn this now-useless skill. Eventually, nobody in 'Merca will know how to measure things, much less learn to count. This proven since students are tested on neither concept. Measurement (as it is called) is considered too stressful for young children being homeschooled by their drug-addled parents or cult members.

Rulers are still in use, just not for measurement. A plastic one makes a perfect and colorful play sword. Old-fashioned wooden ones are used by teachers and parents to beat the pee-willy shit out of their children, keeping a longstanding American tradition. Tape measures make for excellent and entertaining YouTube videos.

There are still some brave children who will attempt to measure something, like a piece of wood for a skateboard. The technique is instinctive, as the ruler user will slap it down and look for the first recognizable leet character they can find, then make a mark somewhere in the nieghborhood. The piece of wood is laid in the street until a vehicle comes along and breaks it. The child then bursts into tears which is noticed by a parent. Then the parent buys a skateboard made in China, which is guaranteed to explode into a ball of flame somewhere along the line.