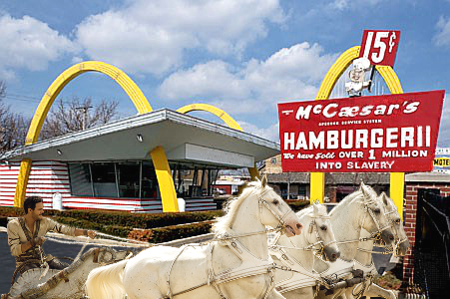 McDonald's restaurants are based on earlier Roman designs shown here.

McDonald's is a restaurant chain dedicated to bringing Irish cuisine to the world.

Originally begun with only boiled potatoes on the menu and using the Potato Famine as a theme, its owners were puzzled as to why the restaurant was so unpopular.

Enter Ray O'Kroc, who was given the restaurant by his relatives as a joke and as punishment for having intelligence and ambition. After careful study, O'Kroc decided that the food should have the elements favored by most people: salt, grease and sugar. So he overhauled the menu making it American, with hamburgers the centerpiece of the menu. Potatoes would still always be included but as French fries. He turned to the Roman Empire for the general business model, where he would use their architectural arches as design elements. He would also use slaves for labor as the Romans did.

Initially, to bring in customers, clowns with AK-47s were sent out to force people to come to McDonald's restaurants. Despite lawsuits by mobsters in Japan and Italy that did the same thing for their mob-owned restaurants, this strategy worked perfectly in combination with TV commercials brainwashing children that they had to go to McDonald's, no matter what. These clowns eventually morphed into mascot Ronald McDonald when laws were introduced to prevent the open carrying of weapons.

The rest is history, with the corporation now owned by the machines that run the Matrix in which we live.