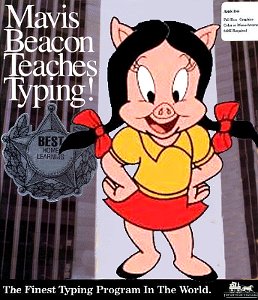 Box art of the typing program. With the name clearly evident, it is hard to understand why so many people refer to her as Mavis Bacon.

Mavis Beacon is a typing teacher who created the famous typing program bearing her name.

Beacon foresaw the expansion of teh interwebz and the lack of touch typing skills needed by future mindless worker drones. She was also dismayed that people were using their elbows, noses, penises, dildos and taxidermied animals dropped on the keyboard to operate their computers. She then created her teaching system that included games. Released on CD, this initially confused buyers who only thought of the player drawer as a drink cup holder. Parents bought the program for their children, liking the fact that it had a hardwood ruler that would be automatically used on the head or knuckles of those who were progressing too slowly. At the same time, children appreciated its "boss key" feature that would make keyboard tapping noises while they napped. Of course, unfortunately, this in turn gave rise to leet culture and the use of strange characters that are only used to summon demons.

However, the rise of the smartphone drastically minimized the skills needed to type messages. Twitter or other social media sites could be accessed if you had one or more thumbs. Messages were so short that the hunt-and-peck method returned; its 45% error rate was just excused as leet or what is now called txt sp33k. Beacon conceded this and reinvested her profits into thumb replacement clinics that are found throughout America, Europe and Asia.

Mavis Beacon was nearly killed in 2006 when a driver who was texting narrowly missed her and then backed up for a second try when he recognized who it was. She was throughly depressed at this and at all the times she saw people at work holding up their keyboards and typing with their thumbs. In 2014, she moved to the Happycat Dimension, where old typewriters had already gone to spend their later years.

For those without comedic tastes, the so-called experts at Wikipedia think they have an article about Mavis Beacon, or simply go here.